Crash Force is a multiplayer online arena shooter game developed by Ascanio Entertainment. The player assumes the role of a hovercraft to annihilate his enemies. Crash Force will be released on both PC (Steam) and Xbox One in April 2017. Crash Force was released on Steam on the 20th of July 2017.

Crash Force is an amalgamation of the most popular genres in gaming; it is a multiplayer, arena, shooting game at its core with RPG and racing elements, where the player assumes the role of a hovercraft (see Category:Hovercraft) to annihilate his/her enemies.


Each hovercraft is designed to be unique. All hovercrafts are equipped with a primary, fast paced, high in rate of fire, low damage weapon and a secondary low fire rate, high damage skill shot weapon.


Shooting an enemy reduces their health. The player that lands the kill shot of a player scores a kill point for their team, while the player who dies suffers a death point for their team. The team or player with the highest kill to death ratio wins the game (depending on the Game Mode).


Energy is the resource that hovercraft's use for movement, speed boosting and activating abilities. While a hovercraft is moving, it deplete's from its stored energy. When the energy levels reach low, a warning sound notification activates. When energy levels deplete completely hovercraft's cannot move or use abilities that have an energy cost. Energy can be fully regenerated by passing above an energy fountain.

Two of those abilities are based on the class of a hovercraft. Eagle class for example or Aquila as we call them, have the ability to manipulate time.


i.e. Hovercrafts of the Aquila class have abilities like flashing forward through time, traveling back in time for a couple of seconds or even slowing down time for all enemies in an area around them.


The other two abilities we have given to the hovercrafts are based on the character we want to give to that hovercraft. Some abilities are offensive such as summoning chainsaws to damage opposing players.


Other abilities are defensive such as summoning a shield to protect you against enemy fire. Others are utility abilities such as trade health for speed and rate of fire.

Leveling Up and Skills Tree

In Crash Force we are developing a leveling and Skills Tree system. By playing matches you gain experience points. Collect enough experience points and you level up. Upon leveling up, you gain a skill point to unlock a skill from your skill tree. Once you reach the level cap you gain a token (Aviation Point). You can use this token (Aviation Point) to unlock special skills that cannot be accessed otherwise. 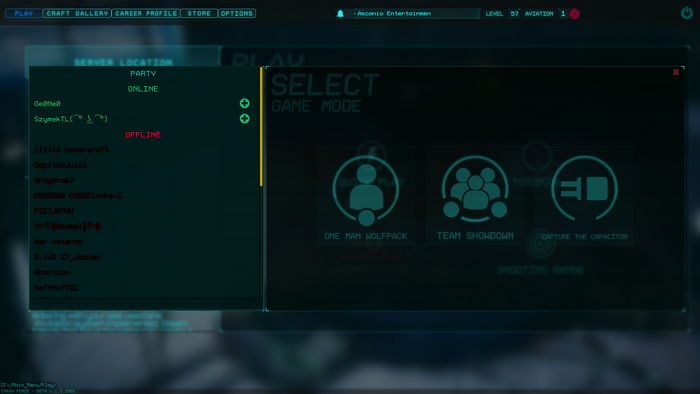 Crash Force at the moment will have three Maps when Closed Beta will be released. The map names at the moment are Aquila Plains, Cicuma Forest and Clava Tombs.

Insignias are cosmetic icon for a player's profile that adds flavor to a users experience in Crash Force. The color and insignia design can be seen through out the main menu and in-game kill/death announcements. Insignias can be bought in the Market.

Decals are cosmetic icons for the hovercrafts. You can choose from different decals, and your choice will be shown in-game underneath your hovercraft. Decals can be bought in the Market.

Bodykits are a cosmetic effect for the hovercrafts. You can buy a skin through the Market tab in Crash Force.

Sprays are a cosmetic effect for the hovercrafts, similar to Bodykits but with customization that can be manipulated by the user. You can find the Sprays through the Craft Gallery and then in the Customization tab of a hovercraft in Crash Force. There are 255 different colors to choose from and five different types of Paint Materials. Each hovercraft's parts are different and threfore each hovercraft has fewer or more parts to apply Paint onto.

Ranks are unique badges which are awarded to a player depending on their profile level. Every two levels, and up to the max level (90), a Rank and a badge are awarded to the player and are shown in Crash Force’s Main Menu.

We have added a new mechanic in Crash Force where your hovercraft can melee attack an opponent when the RMB is pressed. All five available hovercrafts are now equipped with a Bumpers that can be used to deal extra damage when you are in an approximate melee distance between your hovercraft and an opponent.

Crash Force will be released in June 2017 for:

Retrieved from "https://crash-force.fandom.com/wiki/Crash_Force?oldid=1995"
Community content is available under CC-BY-SA unless otherwise noted.